In the Arabian Nights, Ali Baba, the hardworking woodcutter, is deep in the woods of Persia when he spies a band of forty thieves depositing their loot in a magically sealed cave. Later, using only the two words he overheard and his Stihl chainsaw,1he gains admittance to the treasure trove and forever changes his fortunes. 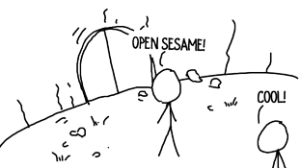 Most consultants are sedulous professionals but, unlike Ali Baba, they lack the magic words that will open the doors to richer rewards.2Instead, they beat their heads against the cave doors; a frustrating, painful exercise that is ultimately futile. In an effort to grab a portion of their prospect’s hidden budget, consultants extol the benefits of their work, they reveal that doom is just around the corner if the prospect’s problem isn’t addressed quickly, and they point out that only an independent expert (like themselves) will have the perspective to deliver salvation.

Occasionally, these pitches pry open the doors to the corporate coffers; but, more often than not the consultant is left on the outside; colder, poorer, and in search of yet another prospect. What we consultants need are some magic words that will open the padlocks on our prospects’ wallets. 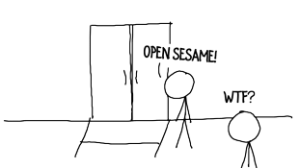 You already know this word well. Entire books have been written about the question, “Why?” and how to use it effectively. Asking “Why?” a single time demonstrates you’re a wise, Socratic investigator. Asking five times underscores your mastery of the Six-Sigma methodology. Asking 100 times reveals your inner four year-old. Stick with five times or fewer.

When a prospect said to me, “I want to train my sales people on consultative selling skills.” I inquired, “Why?” That simple question launched a deep, involved conversation that transformed a $25k training project into a $175k, multi-phase initiative. That’s the power of Why?

As in, “Why now?” Don’t you hate it when you drop everything to put together a proposal for a client then find yourself on hold for two weeks? Two weeks turns into two months, then it slides into never-never land. You can save yourself a lot of grief (and win far more projects) by asking, “Why now?” Some clients have the attention span of squirrels—they flit from one emergency to the next. When you probe into the urgency of the project, you uncover whether the prospect has hit a tipping point and is confident they need a consultant or whether they’ve called you with their need-of-the-week.

As in, “Why turn to the outside?” Our biggest competition is internal staff. Joe-Bob in the cubicle down the hall is already paid for and he’s just sitting around with his thumb in his eye. Why doesn’t your prospect use him? You see, most consultants try to persuade prospects that they’re needed. What I do is the opposite.

I point out that the prospect has talented internal resources at their fingertips then ask, incredulously, why they would turn to a high-priced, outside resource like me.

As in, “Why bother?” In September, 2004, a federal employee approved a $315 million bridge-building project. Unfortunately, the new bridge was a pet project of a powerful person with parochial interests, and it gave access only to a tiny airport in a town of 50 residents. One year later, the public realized there was no good reason to bother with this project and the infamous “bridge to nowhere” was scrapped.

When you push your clients to justify their initiative you do yourself and them a huge favor. Bridges to nowhere lead to proposals that never close, small projects, and dissatisfied clients. Conversely, when your prospect posits powerful answers to “Why bother?” you are in the hunt for a rich, high-margin project.

These four magic words flip the conversation around. In the past you may have tried to convince a prospect why your project is important and why you’re the perfect resource for the job. With these four words in play, suddenly the prospect is trying to convince you that their project is urgent and valuable, that Joe-Bob doesn’t have the time or skills, and that they have no choice but to turn to your firm. Hmm… the prospect is selling you. How do you like them apples?

Students of Arabian Nights may remember that Ali Baba’s neighbor, Cassim also gains entry into the treasure-filled caves using the magic words. Alas, since Cassim didn’t know the magic words to get back out, he died a gory death. Similarly, while the four words above will help you uncover more, high-value projects, you need some additional vocabulary to close the business. But that’s another story. 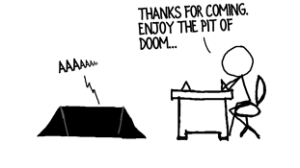 How to Convert a Stranger into a Prospect in 10 Steps