Is consulting still a lucrative profession? Is the parody of the Aston Martin-driving consultant played by Don Cheadle remotely close to reality? (Cheadle won a Golden Globe for his portrayal of a consultant, which is more than most consultants would get for acting like themselves.)  Those questions and more are answered in this post.

Yesterday, a charming fellow who is a partner in a Washington D.C. boutique firm asked me how much revenue a consultant could reasonably expect to bring in each year. Whether this information was meant to bolster his efforts or ouster an underperforming colleague I don’t know. Either way, my informal survey of consultants suggests that a majority do not generate enough revenue annually to pay for a child’s four-year college education.* 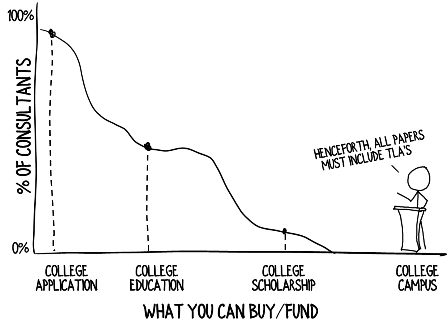 So, let’s say you’re smart, but not a genius. You have interesting and clever approaches, but you haven’t developed an unprecedented breakthrough in your field. You’re not widely known, but you can build a network. How much should you expect to bring in each year if you do things right?

Your ability to generate a handsome income is driven by three factors, which I’ll explain in a moment, regardless of whether you are a solo-practitioner or a partner in a large consultancy. And, while the benchmark you should look at depends considerably on the size of your consulting firm, as shown below, if your performance is solid you should at least be clearing the college-education hurdle every year. (If you want to buy your own college, you’re still better off becoming a star athlete, creating a hit video game or owning an online poker site.) 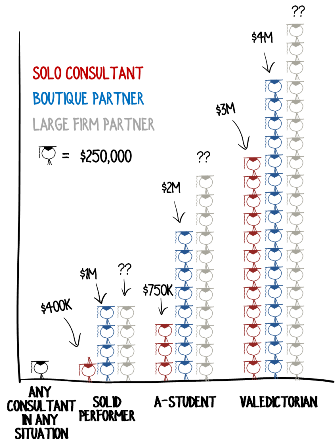 I don’t have enough data to put in good estimates for partners at a large firm, and Don Cheadle’s Aston Martin didn’t seem like a solid indicator. If you have any insight on revenue-per-partner at large consulting firms, please share it in the comments section.

Having established the number of kids you should send through Swanky U in one year, the question is: How? How does a consultant move off of academic probation and onto the honor roll? As I mentioned just above, the factors are the same no matter what size firm you’re in. They are: Fee Power, Leverage, and Reach.

Fee Power is your ability to command big bucks for your work. This is driven by the value of the problem you solve, who you serve, the strength of your intellectual property, your credibility, and so forth. I’ve written extensively about this elsewhere. (Also, I often lead workshops on this subject for the Association of Management Consulting Firms. You can sign up here.)

Leverage is your ability to deliver more value without taking more time. The classic leverage approach employed by large consulting firms is staffing. A single partner who utilizes an army of cheap “utes” to do the actual work can generate gazoodles of revenue. But there are other ways to achieve significant leverage. For instance, off-the-shelf products that require no marginal labor. One famous, solo-consultant sells a couple of million dollars annually in books, DVDs and pre-recorded training courses. Not a bad gig. Low-labor annuities are another great source of revenue that many smart consultancies tap into.

Reach is how many potential prospects hear your story. You could be out there knocking on doors like the white-collar version of the Fuller Brush man, or your marketing wizardry could be attracting clients like the Rathskeller attracts Sophomores. (Not that drinking happens on campus anymore. Certainly not.) Either way or both, without more clients, your revenue-generating capacity hits a limit pretty quickly. 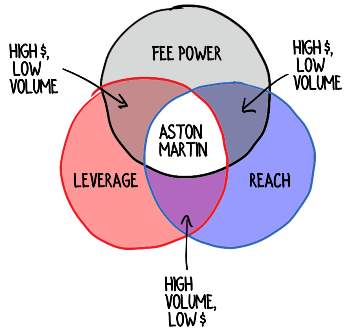 How much money can you make as a consultant? If you do it right, plenty. You probably won’t be able to reshape the local campus in your image, but putting the kids through school should be a no-brainer. Of course, once they graduate and move back in with you… that’s another story altogether.

*The performance yardstick is still purchasing power; however the units have changed from pizzas to college educations due to a change in family circumstance. And gluten intolerance. Total cost of a baccalaureate at a swanky private school is estimated to be $240,000 for a parent. (Tuition, room and board beyond four years is not included, as a certain student is on his way to finding out.)

Productivity and Other Stupid Consulting Metrics

How to Crank Up Your Consulting Success by 189%