By perusing this research document, built from annual surveys of a bazillion consultancies around the world, you can benchmark your firm’s performance. Are you up to snuff? Better than the average bear? Are you tackling the tasks that build value and attract a deep-pocketed buyers who will reward your years of toil with a sweet buyout (if that’s your goal)?

Stop looking. The numbers are sending you off course. I’m not sure which makes me more aghast: the statistics that are reported year after year or the number of firms that review those statistics and track them internally. Let’s take a look at one traditional, widely used management metrics: productivity.

Productivity is the number of hours you (or your consultants) work divided by the total hours available for work. Someone with too much time on their hands determined that consultants’ productivity should be measured against a standard of 2,080 hours. Makes sense because we all know that the more hours you (or your staff) work, the more money you’ll make. Oh, but actually we don’t know that. Or at least we shouldn’t, because productivity makes no sense. In fact, it borders on absurd.

Success as a consultant derives from wining engagements and creating value for clients. Assuming you are selling your knowledge and wisdom, not just a strong back and willingness to do whatever you’re told, you don’t create more value by spending more time on a task. To the contrary, the less time it takes you to win an engagement or solve a client’s problem, the more value you have created.

Yeah, I know Edison spent eighty years testing nine million different elements before he went to Harbor Freight Tools and bought a flashlight (I may have minor details of the story askew), but it would have been better for him and the world if the first material he put his hands on was carbonized bamboo. 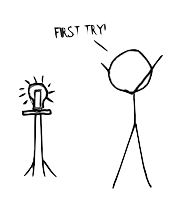 Based on traditional metrics, if Edison had been in a consulting firm he would have earned accolades for the years he worked tirelessly on the lighting project, racking up impressive billable hours. Then, the months after his breakthrough, when he was just hanging out, listening to mp3s on wax cylinders, his productivity numbers would have plummeted and he would have been put on probation. Productivity is a ridiculous metric that rewards the wrong behavior.

Utilization is no better. Leverage, multiples and other common consulting metrics can be just as misleading or more. What measures should you use to manage your firm? Revenue sold, revenue worked, EBITDA, and growth. Those four metrics are all you need to allocate resources, judge performance, chart your course, and achieve real success. Heck, using those four metrics, even a dumb blue jay could make money at consulting. Once it comes out of its avian coma. (No birds were harmed in the writing of this blog.)

Why Some Consulting Firms Grow, and Others Don’t…

How Much Money Can You Make as a Consultant?