Two case studies reported to me by consultants in the past couple of weeks:

Rich, in South Carolina, nabbed a $64,000 project from a state agency.

To win the project, he submitted a proposal that was easily accepted because he was the only consultant bidding.

The proposal built on three phone calls between Rich and the agency’s Grand Poobah.

The first phone call consisted of Rich following up on an introduction made by one of his colleagues at his boutique firm.

Maria, up here in chilly New England, closed an introductory 12-month, $36,000 engagement with a tech startup.

The proposal emerged from a single conversation—the Context Discussion—conducted via telephone two weeks ago.

That Context Discussion started with an outreach call to the decision-maker, whom Maria had met at a party held by a mutual acquaintance.

What’s the common starting point for these two case studies? Was it incomparable command of their subject matter? Decades of industry experience? A breakfast bowl of Wheaties (with chocolate nibs added)?

They took it upon themselves to connect, personally, to prospective clients.

Rich regularly reaches out to three contacts each week. That doesn’t sound like stellar networking, but when we started working together, he wouldn’t reach out to anyone and lived off the revenue produced by his firm’s primary rainmaker. Now he’s joining their ranks.

Maria typically talks with up to ten people in her network each week—sometimes in person and sometimes over the phone.

These case studies are emblematic of one of the most reliable patterns in consulting:

To enjoy a steady stream of consulting opportunities, you have to connect with people one-on-one; “voce a voce.”**  That means picking up the phone or meeting in person. 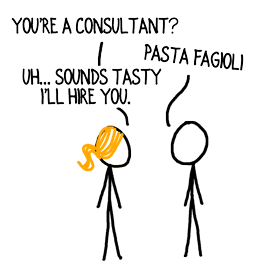 Are you sitting in your office pounding out client deliverables, or sending emails, or “working on marketing” by which you mean writing terrific content? That’s not enough. You must be in front of people.

End your weeks with sunshine, starbursts, and comets.

Does outreach work for you? Let me know in the comments section below.