Huckleberry (a.k.a. Huck), the Assistant Deputy Vice President of FruitSpread, Co. asks whether you can help him out of a jam. “Yes I can,” you reply, already tasting a sweet new consulting project.

The discovery process with Huck is smooth, and you anticipate this will be a plum engagement. You submit an irresistible proposal (which includes the seeds of future projects) and all that’s left is to seal the deal. 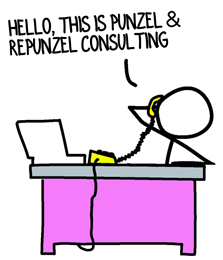 Surprisingly, Huck misses the call you scheduled to address any sticking points on the proposal. He also doesn’t respond to emails.

Finally, after two weeks of stewing over the situation, you reach Huck. He informs you, “I submitted the proposal to my boss, but she was canned. Now I’m waiting to find out who replaces her.”

Huck had to clear the proposal with his boss? That’s an annoying twist, and you’re left with a pit in your stomach, knowing the fruit of your labors is frustration.

Every consultant has tales like this one—where a project seemed like a sure bet, only to find the person who claimed to be the decision maker couldn’t approve the initiative after all. Grrrr.

What’s the antidote to this sour situation?

Most consultants use one of the following approaches to identify the decision maker:

The most popular option is doing nothing. But, even when we ask one of the first three questions we’re often led astray. The person we’re talking to says he’s the decision maker, only to reveal later that someone else’s approval is needed.

Huck isn’t being malicious. In his mind, he is the decision maker, or at least an important decision maker. And he does have to approve the budget for the project to go forward… right before his boss also gives the project the nod.

What you need is some x-ray goggles that will penetrate your contact’s unwitting subterfuge. A reliable divining rod that will point you to the true seat of power.

In fact, you were dang close to it before, and only a subtle change in your question will expose Huck for what he is: a fruity pretender, sweet-talking you despite having no budget authority.

I’ve found in my practice a very trustworthy approach for identifying the final decision maker inside a new client. I call it the Decision Story method and it starts with the following question:

“What’s the process for deciding on this initiative and bringing a firm like us in?”

The most important word in that question is “process.” Rather than asking Huck for a definitive answer (“who makes the decision?”), you’re asking him for a broad description of what will happen. A story.

Huck’s tale offers the clues you need. He can paint himself as the decision maker while indicating others are involved. For instance, when he says, “We’ll have to look at the price, of course,” then you know to ask who “we” refers to.

Try the Decision Story and you’ll discover whether it makes winning projects a more fruitful experience for you.