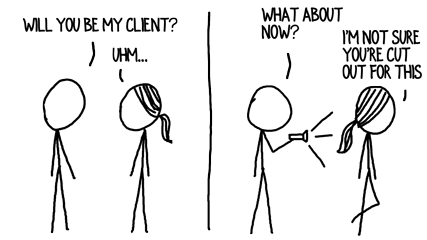 Most consultants spread their light wider than they realize, and reduce their effectiveness. Large targets are made up of many, many individuals. And when each says “No thanks” to your offering, that doesn’t accumulate to a “Yes.” It’s just a lot of “Nos.”

You are far better off focusing on a very tightly defined group of prospects with whom you can build a deep relationship and whose common problem you know inside out. How small? You may be surprised.

A few examples of the Law of Small Numbers:

Like the firms in those examples, focus your practice on a small, homogenous group with a common need that they’ll pay to resolve. Your prospects will feel like you “get” them, and you’ll be able to demonstrate success in situations that feel familiar to them. Both of those build the trust that will lead to a consulting sale.

How Big Does Your Target Need to Be?

That depends on four factors:

One consulting group I work with enjoys a high repeat rate (70% of revenue is from return clients), very high market penetration (roughly 60% of their target has hired them at least once in ten years), and an average project size of $50,000. With those numbers it’s easy to see how their tight  target of under 300 prospective buyers has delivered over $6 million in annual revenue.

They leverage the Law of Small Numbers; i.e., they know their target extraordinarily well, and are well known by their target. You can do that too. 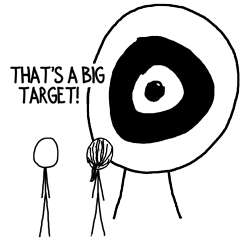 A simple calculator will show you exactly how big your target needs to be, assuming you penetrate it over ten years. Yes, I’m giving you a ten-year time-horizon. You may be amazed at how tightly you can define your target. Perhaps as small as a few dozen prospects.

But, you must identify a common, burning need among that small target. A tight target and the right offering are your ticket to success.

Is your target size smaller than you thought it could be? If so, what are your thoughts about narrowing your target?

Should Your Marketing be Positive or Negative? Surprising Research Gives the Answer