There is always competition for the consulting engagement you’re hoping to land, even if that competition is only internal staff. Our profession is becoming increasingly crowded, though, and competition from other firms is on the rise. Do you know how to defend against other consultants gunning for your business?

This past Sunday I played hockey for six hours—part of an annual, marathon hockey fundraiser for charity. During the final stretch, my squad played a team that should have shellacked us. Their players appeared far better than ours. Surprisingly, we held our own and may have even won the game. (No one really tallies the score in these charity games.) 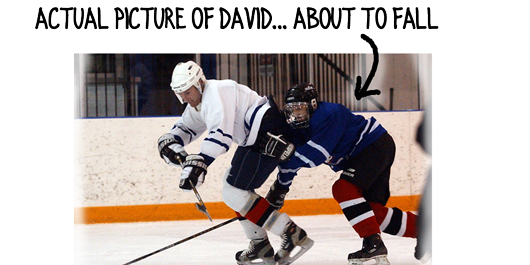 The difference was our goalie, who played insanely well. It was his defense, not our offense that kept us in the game.

In consulting, the ultimate defense against competitive consultants taking a run at the project you want is your powerful, trusted-advisor relationship with the decision maker.

However, relationships aren’t the only defense. Even a strong relationship can be displaced by a well-aimed shot from a hungry competitor—something I’ve learned the hard way on occasion. That’s why you also need to defend your business like a goalie.

Shrink Your Net. If a goalie had to prevent pucks from hitting any part of the 85-foot wide wall behind him, he’d make few saves. (And I’d score more than twice a season). But a hockey net is only six feet wide, and that’s a heck of a lot easier to defend.

Goalies can’t shrink the territory they’re required to guard, but you can. Define your target narrowly. Focus your consulting firm on a highly-specific  problem and a tightly-bounded market. 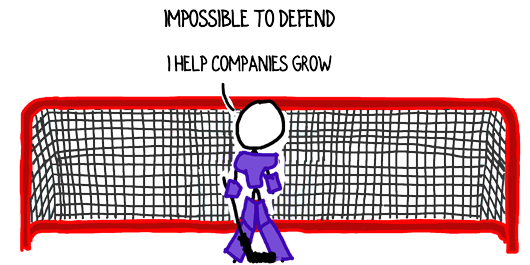 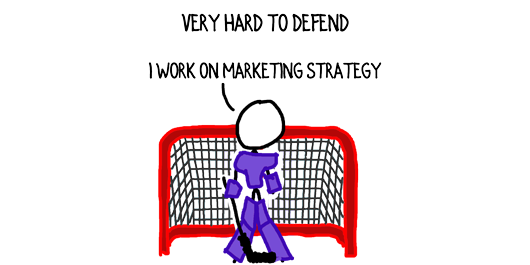 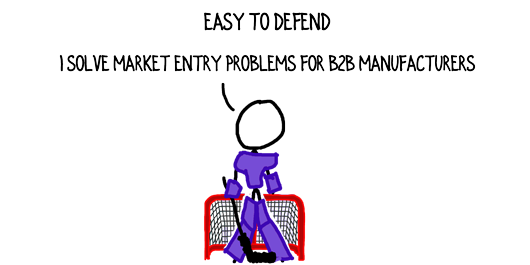 Improve Your Skills. Our goalie was a phenomenally talented young man. While other hockey players his age participated in skating drills and practiced passing plays, he devoted his high school and college years to honing his netminding wizardry.

You could easily become distracted by the various challenges your clients face and the never-ending small fires associated with running a consulting practice. Don’t. Obsessively build your skills, while offloading distracting tasks that could swallow your time.

As an independent consultant running a solo practice or boutique firm, the two skillsets you must invest in and constantly improve are winning business and solving the specific, narrow problem that your firm addresses.

Recently, I assessed a consulting firm that epitomizes the goalie defense. They’ve shrunk their net down to a super precise, extremely defensible target: problematic relationships between CEOs and Boards at companies owned by Private Equity. Plus, they continuously develop incredible depth in their solutions to those problems—outfitting Private Equity firms and the CEOs of their portfolio companies with every definition, process and template necessary to transform a struggling relationship into a productive partnership.

As a result, even when they haven’t cultivated the strongest relationships with their clients and prospects, they’ve consistently knocked other consulting companies out of the box and survived attacks from talented competitors. Their goalie defense is unassailable and it’s winning them a ton of business.

If you were going to choose one way to improve your skills or shrink your net, what would it be?

This Simple Step Pushes Your Consulting Firm into High Gear

3 Steps to Building Trust in Your Firm (and You)